Review: The Kiva and the Mosque 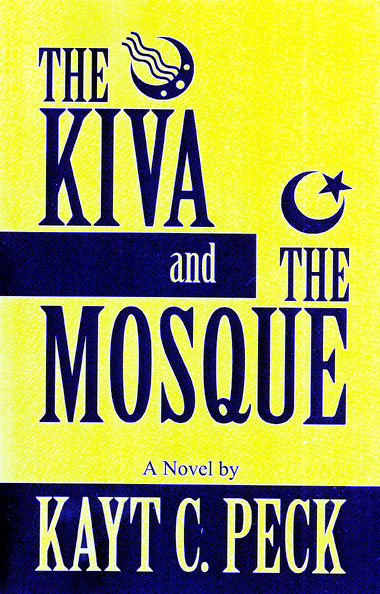 The Kiva and the Mosque by Kayt C. Peck is part fantasy, part spiritual journey, part romance and part political statement. All of the parts come together in an enjoyable reading experience that is fast-paced, entertaining and satisfying. The author celebrates life and hope in an interesting tale that calls for imagination, an open mind and respect for the unknown and unknowable.

Her main characters are ordinary people with an extraordinary capacity to act when called upon. They feel like old friends, people you want to root for and whom you want to win. The ideals expressed in the narrative are familiar themes much talked about but little lived by: world peace, respect for all, care and protection for those least able to take care of themselves.

Kidwell Brown’s visions inspire her to valor, Aisha’s to depicting a world of possibilities. The story recognizes the existence of evil and the power of good to overcome all obstacles.

Kayt’s story encourages enlightenment, compassion and understanding, age-old precepts that belong to no one religion but to all. The Kiva and the Mosque is unashamedly idealistic in tone and message. It encourages a belief that even in this flawed world peace, understanding and respect are possible.

Kayt Peck is a poet and writer whose career has included being a journalist, a U.S. Naval Reserve public affairs officer, and grant writer. She lives on a ranch near Las Vegas, N.M.

The Kiva and the Mosque is available in Las Vegas at Tome on the Range Bookstore, and at online retailers.
Posted by Unknown at 12:24 PM No comments:

Review: Footlights in the Foothills

It has been my experience that writing can be both liberating and limiting. When you add research as an element of the process it can almost become drudgery… unless you enjoy research and can convert that enviable talent into intelligent, entertaining and engaging prose. Edwina Portelle Romero has done just that in Footlight in the Foothills, Amateur Theatre of Las Vegas and Fort Union New Mexico, 1871-1899.
Do not, under any circumstances, be deceived by the academic sound of the title. Yes, it is educational but it is also down right fun to read. Edwina, Pat to those who know her, has taken an historic era and painted wonderful pictures of the culture and creativity of the times. Brevity, as Shakespeare so eloquently said, is the soul of wit. This little book of fact-based anecdotes is packed with priceless prose, engaging wit and interesting lore.
The clarification of what constituted a theatrical venue — from the music halls to the opera houses to the boards of the Fort Union stages — is illuminating and fun. Was it the Duncan Opera House or the Ward-Tamme Opera House? Where was it? How did these establishments survive and thrive? Perhaps it had to do with filling time with creative pursuits. Perhaps it had to do with talented folks who wanted to make the most of their talents. Perhaps it was a consequence of wanting to entertain and be entertained. Whatever the reasons, Edwina has pulled 28 years of amateur theater into a concise rendering that is informative and charmingly delivered using direct quotes from printed reviews and critiques.
Footlights in the Foothills identifies Spanish and English language companies and performances, all well and enthusiastically attended, sometimes too enthusiastically. At one performance it was reported that a director ejected several “young men” of ‘the best families’” from the theater because of their rowdy behavior.
“One of the significant features of amateur theatre,” the author writes, “is its involvement in and reflection of community. When rail service arrived in Las Vegas, it brought many new people of diverse ethnicities and races and thus strengthened ‘ethnic consciousness’ among the Neuvo Mexicanos. As a result, Spanish-language newspapers, featuring sections on literature, poetry, and popular fiction, flourished…”
Las Vegas performances were only a part of the big picture when it came to live amateur performances. The antics on stage at Fort Union and the competitiveness among the theatrical companies at the fort reflect a somewhat farcical real life tension that played itself out in the pages of the Las Vegas Optic in the form of reviews, which sometimes took on a rather acerbic and personal tone.
A good writer of historical fact takes many elements and puts them together in entertaining ways. In Footlights in the Foothills, Edwina has done that and more. Her attention to detail and informed understanding of the period leads to a book worth having on your bookshelf so you can go back to it time and again.
Footlights in the Foothills, Amateur Theatre of Las Vegas and Fort Union New Mexico, 1871-1899, ($16.95), by Edwina Portelle Romero is published by Sunstone Press and is available at Tome on the Range in Las Vegas, N.M. and at other fine bookstores.
Posted by Unknown at 7:40 PM No comments: