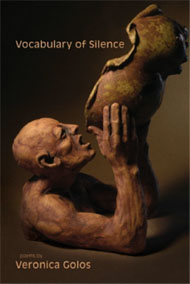 Veronica Golos, my in-studio guest on Tuesday, Dec. 27, carries about her a spirit of peace. Her calming essence banks a fiery passion that comes through in her book of verse, Vocabulary of Silence (Red Hen Press), which recently won the New Mexico Book Award for Poetry.

Veronica said the poems aren’t a commentary on war or peace or anything but her own reaction to a world experience viewed from a distance. She began writing in response to media photographs taken of abuses at Abu Ghraib prison in Iraq. The images left a mark on her heart and brought out a desire to explore from a personal perspective what was happening a world away.

The book’s title perhaps reflects a thread that runs through all the poems. Brutality is not a silent event. It is noisy and vicious, soulless in a way only mindless violence can be. In that surfeit of screaming carnage the voices of the innocent or the wounded go unheard. The cacophony of war can be measured in decibels of shattered hopes, broken bodies and lives lost. This truth comes across in Veronica’s carefully crafted poems.

The poetry is deep and wide. Veronica expresses painful realities that are soul shaking and tear making. I was deeply moved by the selections she chose to read on the air. The meaning of her words became crystal and reflective, delicate crystal that shatters in the heart, and reflective prose that challenges the intellect.

A Bell Buried Deep, (Story Line Press) an earlier work by Veronica, was the co-winner of the 16th Annual Nicholas Roerich Poetry Prize and nominated for a 2004 Pushcart Prize by Edward Hirsch.

From a review of A Bell Buried Deep, by Alicia Ostriker, poet and author of Stealing the Language and Dancing at the Devil’s Party: “A Bell Buried Deep is a confluence of three sacred  streams: the sensuous body which is ours and the world’s, the passion for justice which craves to undo the oppressions and cruelties we inherit from the past, and the spiritual imagination that is able to generate hope.  Veronica Golos knows that history is only myth by another name, and that it repeats itself until we change it.  Her poetry is lucid, alive, with the specifics of intellectual and emotional experience, and resonant as a bell.”

Victoria’s work has also appeared in My Land is Me, 3 Poets 4 Peace, The Master’s Hand, Threaded Lives and Pomegranate Seeds: An Anthology of Greek-American Poetry.

All of these books may be purchased by request from Tome on the Range in Las Vegas, N.M., at Moby Dickens in Taos, N.M. and from veronicagolos.wordpress.com.

More about Veronica Golos from her online bio: “Golos has taught poetry and multi-genre writing for Poets & Writers, Poets House, and the 92nd St Y/Makor and the New York City Public Libraries. Her courses included Breakin’ the Rules!, poetry for teens and pre-teens; Creative Writing & the Use of Years, memoir for seniors;  I Am More Than This, a workshop for Holocaust survivors at the Nassau County Holocaust Museum. She was Poet in Residence at Sacred Heart Academy in Greenwich, Connecticut, in 2005, at the Nassau Museum of Art, and Yaxche School in Taos, New Mexico. She has lectured on Teaching Poetry to Children at Columbia University’s Teacher’s College and Colorado State College.”

Celia Hayes, my call-in guest from Texas, rescued me on Tuesday when Veronica was delayed. We had a wonderful discussion about her books, writing in general and the challenge and rewards of writing historical novels. Celia is a dedicated researcher and has self-published several books, including a trilogy about German immigrants who settled in the Fredericksburg area.

From Celia’s website: “Adelsverein: The Gathering (book 1), The Sowing (book 2), and The Harvesting (book 3): “This trilogy is a saga of family and community loyalties, and the challenge of building a new life on the hostile frontier... Texas is a place most Americans think they know very well, thanks to more than a century of storytelling and myths. But there is another Texas story, even more dramatic for being all but unknown; the story of pioneers who also came in search of land and opportunity and for freedom from rule by aristocrats and princes.”

It was obvious in our interview that Celia is thoroughly engaged in her work, dedicating up to two years from start up of a concept to publication. That time is spent gathering details and creating family histories that when blended in the mix of story telling come together in interesting and informative ways. Celia's attention to detail has garnered her praise and encouragement, but ultimately it is the work that makes the difference.

“I have a spread sheet,” she said in the interview. “It covers a variety of topics and tracks timelines. Everything has to come together.”

The writing life is more than an idea; it’s dedication to the intricacies of plot, action, character development and tension that creates a worthwhile story. In the historical novel the writer isn’t creating a new world, she or he is recreating an era, an emotion, a sense of time and place. Detail is crucial.

Celia, retired from the Air Force, said in her author bio that she knocked around the corporate world for a while, and then got hooked on blogging, which led to writing historical novels about the Wild (or not-so-wild) West.

Celia may be reached at clyahayes@yahoo.com. To purchase her books go to www.celiahayes.com/Catalog.htm. Her print books may be purchased by order through Tome on the Range in Las Vegas, N.M., at online booksellers and from the author.
Posted by Unknown at 4:37 PM 2 comments:

Memoir and Historical Suspense on Tap for Tuesday

It’s safe to say that programming for Writers’ Block isn’t thematic. This week I’ll be featuring a writer whose memoir touches on subjects that remind us of what it was like being a kid and a fiction writer with a flair for historical suspense.
My in-studio guest will be David Perez, author of WOW!, a memoir about growing up in the South Bronx in the 1960s.
From the book’s website:
It’s the South Bronx of the 1960s, a neighborhood teetering on change. The young Puerto Rican boy is living in the housing projects, about to be transferred to Catholic school, where he’s already attended catechism and asked if God “popped out of nowhere.” So begins Pérez’s delightful and engaging “memoirito,” a novella-like tale that follows David trying his best to be “cool” in a neighborhood where being smart in school isn’t something to brag about.
Perez, who now lives in Taos, N.M., is an experienced public speaker, actor, writer, and editor. According to his web bio, he has done activist journalism and feature writing. “Our aim (at Workers World newspaper) was to promote and defend the rights of the working class and all people of color, to talk about Marxism and capitalism and the need for revolution.”
He supports and writes about the arts, cultural awareness and enlightenment and subjects close to his heart.
My call in guest is Mary Schwaner who writes under the pen name of Bailey Bristol. She published her first book in February and just released her second book, Devil’s Dime, which is the first in the Samaritan Files trilogy. It’s a late 1800s tale of suspense with a romantic twist. From Schwaner’s web bio:
Coloratura Soprano/Artistic Director/Programmer/Author: Granddaughter of a concert violinist, Mary began her musical career in elementary school with the family string quartet, but gave up the violin to study opera at the University of Nebraska-Lincoln. There she performed many leading roles for the School of Music opera department before completing her Master’s Degree in 1971. The following year she represented Nebraska in the Regional Metropolitan Opera Auditions in Minneapolis.
Tune in on Tuesday, Dec. 13 at 8:45 a.m. (MST) to hear more from these talented authors. The program streams online at http://www.kfunonline.com.
Posted by Unknown at 12:37 PM 1 comment:

It’s a little late to get this message out, but here it is anyway. Assuming the snow doesn’t prevent me getting up the hill, I’ll be on KFUN tomorrow with Writers’ Block. It may end up that both my guests call in. Ron Wooten-Green, author of When the Dying Speak and A Fine Line of Distinction, In Search of Roots, will be in the studio if he can get there, and Anne Hosansky, author of Turning Toward Tomorrow, Widow’s Walk and Ten Women of Valor, will be calling in from New York state.
How is Writer’s Block doing? I guess the audience is the judge of that. I’d like to get feed back, good or bad. The only way we improve in life is to listen to constructive criticism. What I enjoy is talking to people who are passionate about what they do. I just picked up Anika Nailah’s book, Free, from Tome on the Range Sunday afternoon. It is full of short stories about what it means to be free. I’ve just started reading and find it intriguing. The stories are like quick punches that stop just short of your nose, a little startling and certainly thought provoking. I like Anika’s style of writing and the way she leaves you wondering what happens next.
Tome on the Range is sponsoring a writing contest for youth. I haven’t talked to Nancy about this but maybe we can read the winners’ work on the air or get them on the air and let them read their work.
If you are a writer and are interested in being on Writers’ Block please contact me at fsvandermeer@gmail.com. I want to talk to authors, poets, and essayists.
Why a program about writing? Because reading is the most effective way to learn, and you can’t have books, articles and stories without writers. I also want to encourage people to write who never expect nor want anyone else to read what they write. Writing through whatever is affecting you is another way of dealing with life’s ups and downs.
Tune in every Tuesday morning at around 8:45 a.m., MST for Writers’ Block. And don’t forget you can listen online at www.kfunonline.com.
Writing Challenge
Once a month beginning tomorrow I’ll be giving a writing prompt to listeners. The challenge is to write a short story, poem, essay or article using the phrase as the first line. You’ll have two weeks from the day the prompt is given to submit your work. E-mail it to fsvandermeer@gmail.com or mail it to Sharon Vander Meer, PO Box 187, Las Vegas, NM 87701.
Submissions must be type-written and can be no more than 750 words.
Posted by Unknown at 9:53 PM No comments: