On the air with Cindy Charlton

Cindy Charlton is working on a book and developing her professional speaking and writing career. She has multiple talents and is a mom watching two sons grow up faster than she may be ready for.
She had always loved writing, but did not blossom as a writer until tragedy beat her thoroughly about the head and shoulders. Cindy suffered an illness that left her with prosthetic legs and minus one arm below the elbow. Two years later her husband died following a two-year battle with cancer. She said she had no choice but to be a survivor. Cindy is working to build her writing platform and her speaking career while remaining dedicated to being a mom. She has an indomitable spirit. She is funny, thoughtful and passionate. In her interview she read from an essay about her illness and her husband’s passing, and talks about why being a survivor is for her a must, not an option.
I highly recommend becoming a follower of her blog, A Survivor’s Handbook. Below is the beginning of her December blog, Choose Happiness. Keep reading, especially if you’re looking for something that will make you stop and think about all the reasons to be happy in your life, despite bumps in the road.
From The Survivor’s Handbook: “’Happiness runs in a circular motion…you can be happy if you let yourself be.’ These are lyrics to a song I used to sing when I was a child. The tune was simple and easy to harmonize with, which was why I liked it.  But as I think about this song, I begin to realize that although the tune is simple, the lyrics are profound.” Read more…
Become a follower. You will find inspiration, something to make you smile and much you can relate to.
One of Cindy’s essays has been accepted for Chicken Soup for the Soul which comes out in March. She will be back on the air soon to talk about that and other writing projects.
Posted by Unknown at 3:59 PM 1 comment:

Tome winners on the air 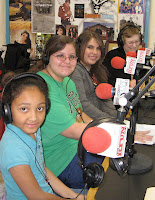 There is no better evidence of a hopeful future than young folks flexing their creative muscles. Writers’ Block on a recent Tuesday featured winners of a Tome on the Range writing contest. In the studio were Melinda Garcia and Emilia Lovato, both 9th graders from Mora High School, and Julienne Risimaah, a 3rd grader from North Star in Las Vegas. Also taking turns at the microphone were Nancy Colalillo from the bookstore and Paul Bunker from Mora High School.
The contest was based on illustrations from The Chronicles of Harris Burdick by Chris Van Allsburg, a book strung together with oddly titled drawings that are haunting and ever-so-slightly dark. The challenge was to write something in less than 250 words that told the story of one of the illustrations.
Thirty-nine students took up the challenge, the bulk of them from Mora High School, largely because English teacher Paul Bunker made the contest a class assignment. He was gratified but not surprised by the quality of work that ended up on his desk.
The stories are wonderful and quite imaginative, each taking an entirely different direction based on the illustration selected. The stories were judged largely on creativity and attention to theme.
Melinda Garcia showed a remarkable understanding of pacing as a means of building drama. Her clever take on The Seven Chairs keeps the reader’s attention and climaxes with a surprise ending. In Oscar and Alphonse Emilia Lovato demonstrates a grasp of how dialogue can move a story forward and make the reader want more. By writing about healing and renewal, Julienne Rirsimaah reflects the hopeful nature of childhood in her tale of The Seven Chairs.
The fourth winner, Camille Sammeth, a 9th grader from Santa Fe High School, was unable to be in the studio. Her story, Mr. Linden’s Library will be read on the air, Tuesday, Jan. 17. This story is an arresting tale about allowing willfulness to get in the way of sound judgment (and good manners!). Wonderfully written and cleverly executed.
All of these stories may be read at www.vandermeerbooks.com by following these links. Melinda Garcia, Emilia Lovato, Julienne Rirsimaah, and Camille Sammeth.
Posted by Unknown at 3:33 PM No comments: