Gail Rubin has written an amazing book about death. A Good Goodbye is a realistic look at a fact of life. Death comes to everyone. What then? A Good Goodbye was the Best of Show winner in the 2011 New Mexico Book Awards. The book was also a national finalist in the 2010 Book of the Year Award, Family & Relationships category.

About the book: (From the author’s website) Just as talking about sex won’t make you pregnant, talking about funerals won’t make you dead – and your family will benefit from the conversation. A Good Goodbye addresses the Baby Boomer generation with gentle humor on the vital information about funeral arrangements that most people don’t learn about until faced with a death in the family. This easy-to-read book tells how to plan a memorial service and reception, ways to communicate the news, collect vital information before it’s needed, and write obituaries and eulogies. It also presents background on many religious traditions, new funeral trends and creative non-religious rituals, event-planning checklists, information forms for death certificates and obituaries, and cost containment. It even covers ways to honor the death of a pet and remember deceased loved ones annually.

Did you know that among the state’s centennial project there was a website entitled 200NewMexicoPoems? The editor of the project was Lisa Hase-Jackson, a poet in her own right with work in multiple publications.

About Lisa: (From the 200NewMexicoPoem website) Lisa M. Hase-Jackson holds a Master’s Degree in English with an emphasis in poetry from Kansas State University and is a trained Creativity Coach. She has developed and facilitated poetry writing workshops and circles all over the world, beginning with the Washburn Writers Fellowship Program in Topeka, Kansas, and including the Peyongchon writers group in Anyang, South Korea and, currently, the Friday Poets Group in Albuquerque, NM. Her literary editorial experience includes working on Washburn University’s literary magazine, Inscape; two years with Kansas State University’s literary magazine, Touchstone; faciltating 200NewMexcioPoems.wordpress.com, a New Mexico Centennial endorsed project  celebrating New Mexico’s centennial through poetry; and a variety of trade newsletters. She keeps a blog at ZingaraPoet.net, which features poet interviews, writing exercises, poetry prompts, articles and poetry picks. 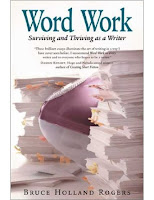 Bruce Halloran Rogers is a fascinating man who has figured out how to make the internet work for his particular skills. He is a prolific writer producing a voluminous amount of work on his website shortshortshort.com. For only $10 a year, three times a month you will receive a brand new original story by Bruce. They must be good, because he continues to grow his subscriber list and he keeps the ones he has.

For six years, Bruce wrote a column about the spiritual and psychological challenges of full-time fiction writing for Speculations magazine. Many of those columns have been collected in a new book, Word Work: Surviving and Thriving as a Writer (an alternate selection of the Writers Digest Book Club). He is a motivational speaker and trains workers and managers in creativity and practical problem solving.

Myrna Haskell has put her popular syndicated column for parent of teens into, Lions and Tigersand Teens: Expert advice and support for the conscientious parent just like you.

About the book: Don’t throw up your hands and walk away. If your teen isn’t talking to you and acting in ways you don’t understand, maybe it’s time to evaluate the behavior and gain insight into what to do. Myrna Haskell has been writing about the very thing that has you baffled. Her book  is a compilation of the best installments of her column for parents of teens, teachers, siblings, grandparents… or anyone who interacts with today’s youth. Also included are several installments that have never before been published.


“Levi Romero is a strange kind of wizard. He can walk up a New Mexico arroyo and come back with a mysterious object full of quotidian magic. Like a rusted tobacco can the grandfathers used to roll their smokes. And when you pry open the lid, you can hear their laughter and gossip coming out. That’s what he does in poem after poem. I read his work and I learn again how to love this life.”

Romero's first collection of poetry, In the Gathering of Silence, published in 1966, features Woodstove of My Childhood, an epic poem based on personal and communal histories. His latest collection, A Poetry of Remembrance: New and Rejected Works, with UNM Press in December 2008, sold out within a month of its publication.

Tome on the Range will fill the second half of the hour with featured children's books and upcoming events for fall and  and the holiday season. Guests will be children's book buyer Janet Chapman and associate Susan Cole.

John Murray grew up and was educated in the United Kingdom. He studied theology in Birmingham, England and in Toronto, Canada. His life experience has been in business, in pastoral ministry, in Christian journalism and for the last twenty years before retirement he was the Executive Director of Eurovangelism Canada. Eurovangelism is a British mission which has been working in Eastern Europe for approximately fifty years.

Jackie Carpenter never intended to become an author. And neither did she ever expect to be a resource for persons facing a crisis in life. But Jackie took the crisis in her life, and subsequent miracle, and wove it into a dramatic and heart-wrenching story – The Bridge: Between Cell Block A and a Miracle is Psalm 91. And the Reluctant Author followed up with still another book, Georgia Justice: A Journey To Faith – a remarkable guide on how to build faith when overcome by doubt, depression and tragic events.

About the Books: In The Bridge, the author tells her story. After her son, Richard Jason Veitch, was falsely accused of felony murder, Jackie Carpenter found the odds seemingly stacked against her: there was no hope, money was of no value, and she was rendered helpless before a jury of 12. But by simply waiting on a miracle from God, she was able to experience deliverance from her troubles—all in His perfect timing. In Georgia Justice she tells a story of faith-building – a how to guide of what it takes to escape from the tightening grips of doubt and depression and begin the journey to renewed and strengthened faith, hope, and ultimate victory. It is a book everyone should read, believers and non-believers alike, those facing a tragedy now and those who have no idea a tragedy lies ahead in their tomorrows.

That’s the line up through Nov. 20. The schedule is subject to change and while I hope to update the information I may miss from time to time. Thanks for listening to Writer's Block, and if you missed a show, be sure to check out the podcasts, which are generally posted within two days of air time.

Posted by Unknown at 4:42 PM No comments: